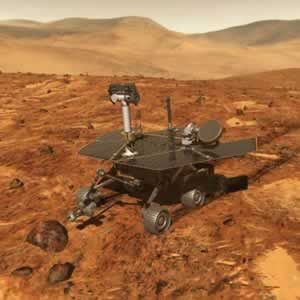 Another example of the versitility of the tools that are available with the Areomineral Recovery & Exploration Vehicle, the scout is a remote controlled drone equiped with numerous forms of sensors and analysis equipment.

Scouts have two primary functions: analysis and surveying. The analysis function is utilized as part of the mining process. When a prospector comes to a volcano, the scouts are deployed. They quickly canvas a specific area of the volcano side and use their on board sensors to determine where the most likely location of a usable mineral deposit is. Once they have isolated the most valuable deposit in the area, they congregate and map the length and depth of the vein. The prospector then moves in an uses the AREV to dig it out.

The second function of the scouts is two fold. Originally the scouts were developed with the intention of allowing them to be used to safely survey and explore the numerous ruins of failed homesteads and settlements that dot the surface of Mars. Some enterprising prospectors discovered that this programming could also be used to test the defenses of active homesteads and settlements. This idea has become so popular and widely spread that almost every prospector converts their scouts for this use.

Retrieved from "https://exodus3000.fandom.com/wiki/Scout?oldid=7187"
Community content is available under CC-BY-SA unless otherwise noted.